Wanting to learn some incredibly interesting and maybe surprising facts about chickens? We have put together 40 of the most interesting chicken facts we could find. Read on to learn more!

Here are 40 chicken facts that we didn’t know, and maybe you didn’t either…..

We hope you have gained some extra knowledge while reading about these chicken facts. We hope you share your newfound knowledge with others so they can appreciate this amazing species of bird as well!

Looking for an easy shopping list of product to help care for your flock? We have put together the essential for you below… 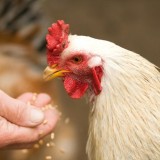